Discover Dakar and its History.

Home to Africa’s tallest statue, Dakar is the capital and the largest city of Senegal located in West Africa, with a population of over 3 million people. The city is situated at the tip of the Cape Verde peninsula, the westernmost point of Africa. That is the reason why it is referred to as a gateway to Africa. It was founded in 1857 and made commune by the colonial administration of France on June 17, 1887, and the European merchants first settled in the Dakar area.

However, the history of Senegal goes back a long way before colonization. From the 5th to the 15th the region was dominated by the powerful Ghanaian Almoravid Malian and sungai empires, which forged the social structure and ethnic diversity that today characterizes the population of Senegal.

Dakar is a vibrant and welcoming mix of African and European traditions. Its coastline plays an important role for commercial traffic and use of modern means of transportation. It is worth mentioning that Dakar’s harbor is one of the best in western Africa and its name comes from the Wolof word “dakhar” meaning tamarind tree. Wolof is a dialect widely spoken in Senegal. 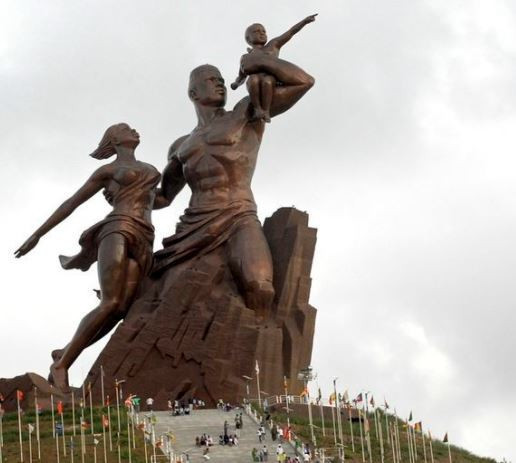 The city of Dakar has expanded greatly since 1945. Dakar has many interesting places to visit. Tourist attractions in Dakar include African Renaissance Monument, the IFAN institute(Fundamental Institute of Black African), major markets, clifftop walks and beaches, Hann Park (home to the Senegalese Zoo), and Dakar Grand Mosque.

The perfect place if you want to begin a tour of Senegal’s capital is near the city’s twin hills. On one of these hills sits the African Renaissance Monument, unveiled in 2010. The statue was built to commemorate Senegal’s 50 years of independence from France. 49 meters high and made of bronze, the monument stands taller than the New York’s statue of Liberty. It is the largest and tallest monument in Africa and the second largest in the world.

The monument symbolizes the rebirth of Africa and commemorates the independence of Senegal. The statue also acts as a museum and you can walk inside and learn so much more about the history Senegal and Africa at large. It is a must to visit this monument when you go to Senegal.

Not far from the statue on the shore of the Atlantic ocean, sits the mosque of divinity designed by French and Moroccan architects. It was opened in 1964 by the king of Morocco, Hassan the second and then Senegalese president Leopold Sedar Senghor. 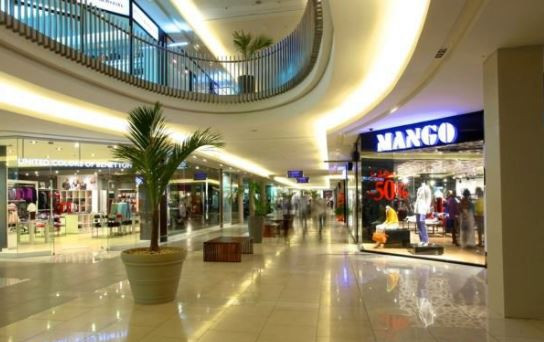 In case, you love shopping, Seaplaza is the perfect place for you, a mall built right at the beach. Perfect for dates, watching the sunrise or the sunset. There are all types of shops inside the mall, video games and kids playground. In case, you’re wondering what to eat inside the mall, I recommend you have seafood. Senegal is a peninsula therefore they can access fresh seafood very easily and quite affordable. Don’t forget to try the jollof rice.

If you love smoking shisha you’ll be happy to know that it is very legal in Senegal, so you can smoke it anywhere at anytime.

But Senegal’s history is most of all the history of its people. When in the area, travelers should not miss the chance to visit Goree Island UNESCO world heritage center and car-free location. 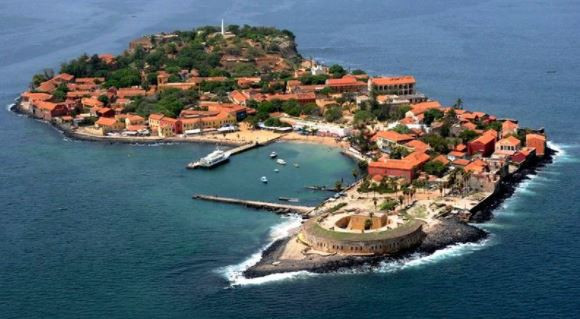 Goree Island is one of the best tourist spots located about 2 km at sea from the main land of Dakar. The island is known for its role in the 15th to 19th century Atlantic slave trade. Half an hour away by ferry from Dakar and you’ll get to visit several museums and the remains of colonial era which still attracts tourists, among them is the house of slaves and it’s featured door of no return, the last time slaves would ever see Africa again. The history of the Island is full of sad events and grief. It was one of the most prominent slave trade centers in Africa. The memories are still alive in the peoples’ hearts. That’s why it is crucial to African Americans to pay their respects to the past of their ancestors.

Dakar has so many beautiful beaches, you cannot go to Dakar without going to the beach. The city is very colorful from clothing to the signs of amazing buses. It’s really bursting with vivid colors. Something worth noting is the security, the streets are safe not only for men but also for women. 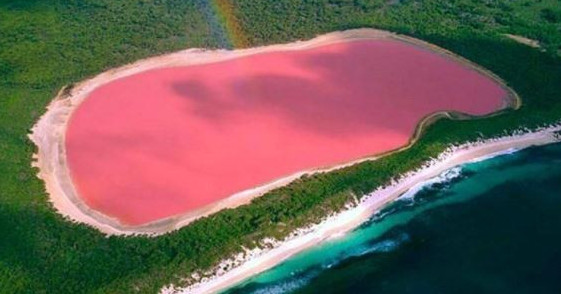 The Pink Lake is also another beauty you must see while in Senegal. It is one of the most visited sites in Dakar. The lake is also known as lake Retba. It has this color due to high concentration of salt. 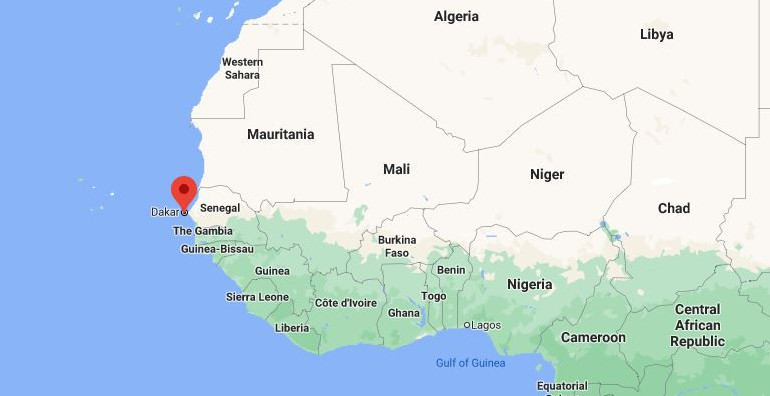 Dakar is not very difficult to locate. It’s the westernmost city in Africa and served by multiple air and maritime travel routes. That makes it the gateway to Africa. This strategic location made it a very convenient stop for the Portuguese, Dutch, and French settlers in the exploration of colonization. Its position on the peninsula means it’s surrounded by coastlines making for great views, a good fishing industry pretty nice waves to surf.

The main boulevard in the city runs along the coast and takes you quickly from one end of the city to the other. In December 2017 and after 10 years of construction a new airport was opened located 29.2 miles away from the city.

Best neighborhoods in the City

Dakar is quite flat but has two round hills call Mamelles (udders) for obvious reasons. If you’re staying in a hotel, you will likely be the Almadies or Mamelles neighborhood. On top of the hill, you’ll find the tallest statue in Africa, the gigantic African Renaissance Monument. On the other hill you’ll find a lighthouse that you can visit. It offers a great view and is a lively bar comes nighttime.

In the Almadies, you can find numerous bars and restaurants, overlooking sea some of them quite fancy and some more rustic. 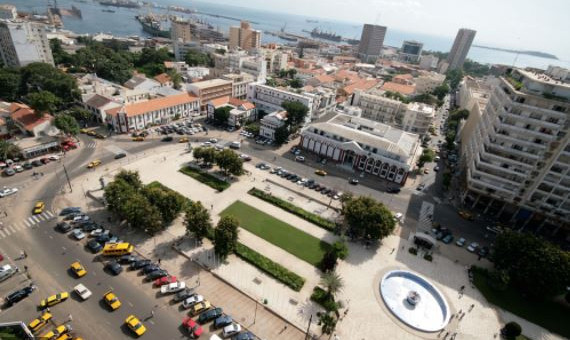 Another important neighborhood is the Plateau. It’s home to the administrations, businesses, and many small shops and restaurants. If you want to buy Senegalese art clothes and jewelry, that’s the place to go. At the back of the Plateau are very nice creeks with private and public beaches. In the background, you can see the Goree Island, where slaves used to be traded. Plateau is also home to the Presidential Palace of Senegal.

When it comes to food, the French influence is very strong and you can find a last choice of wine and cheeses in stores as well as baguette bread even in rural markets. The more traditional food involves a lot of fish and seafood, rice or chicken. The traditional drink is called Bissap, it’s hibiscus infusion sometimes mixed with ginger. In the countryside, meals revolves more on millet and sorghum. 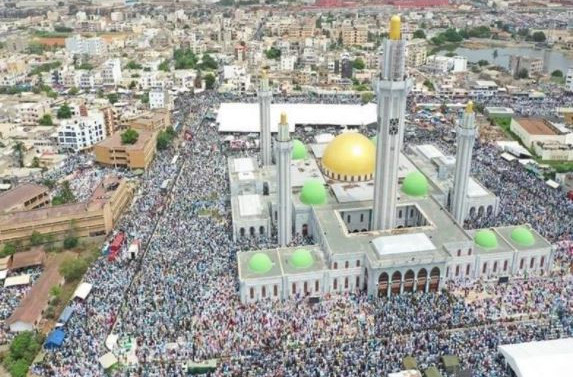 Ninety five percent of the population in Senegal is Muslim and you can see some beautiful mosques with the distinct African style around the city. To some extent religion sets the pace of the society with the Friday prayers and the traditional holidays being observed. However, it is a very tolerant Islam where women are very much equal to men and not required to wear the hijab, bars and night clubs operate without any restrictions, other religions are very respected as well.

Economically, speaking Senegal is the fourth economy in the region and in a kind of rivalry with Ivory Coast for dominance in French speaking Africa. Unlike many African countries, Senegal has very few natural resources and relies mostly on services, tourism, fishing, and agriculture. If Ivory Coast is more prosperous Senegal wins in terms of political stability so much so that the U. S has one of the largest embassies in Dakar.

The most common languages are Wolof and French. English is less common but you will find few people who can speak English.

To summarize, Dakar is a great city to discover West Africa especially if you like seafood and interested in French. It is welcoming, safe, but still colorful and lively which gives you a taste of the West African culture and lifestyle.